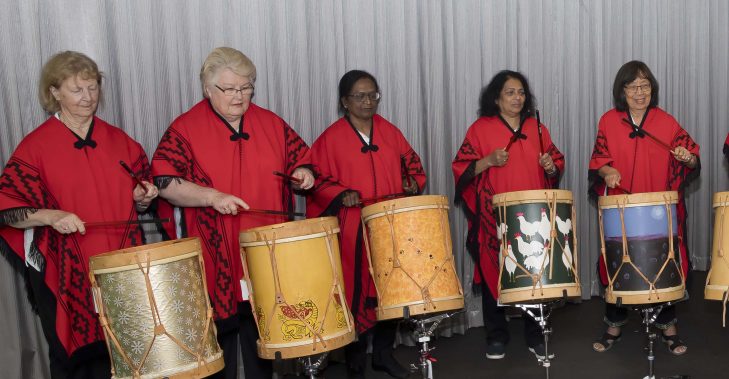 OWN Queensland  sucessfully hosted the 24th Older Women’s Network National Conference in October 2017 and thanks the Department of Communities, Child Safety and Disability Services for its  $2500 sponsorship

These were some of the words shared among delegates who attended.  Members from OWN Queensland, New South Wales and Western Australia  gathered for two days in Brisbane for an action packed program of speakers, workshops, performance, dining and dancing

Aunty Flo Watson provided an acknowledgement of country starting the conference off in a very fitting way around the gathering’s theme of “Surviving and Thriving”. Although covering vastly different perspectives, keynote speakers, Dr Helena Popovic on day one and Barbra Lester on day two both engaged delegates with compelling presentations around simple steps to improving brain function and ageing well and around rebuilding life after domestic violence and going on to support and motivate others.

OWN National Convenor Aloma Fennell provided local, national and international perspectives both on the work of Older Women’s Network but also its interests in issues affecting older people globally, particularly older women. Ms Fennell was recently appointed to the Global Alliance for the Rights of Older People Australia. This network will work to champion the call for greater efforts at an international rights level in support of ageing populations around the world. Congratulations Aloma.

The Day one afternoon sessions saw speakers touch on various topics we all need to know about as the years advance, including financial management planning with Dianne Charman and Laura Marschke, personal health practices by Rae Plush from the Continence Foundation, staying safe from scams and internet fraud by Acting Snr Sergeant Leisa Wathen, and protecting our interests by Deanne Lawrie from the Elder Abuse Prevention Unit.

Delegates made the most of breaks for conversation, reunions and striking up new friendships – before gathering again for conference dinner and a fantastic night of entertainment with performances by the OWN New South Wales Theatre Group and Brisbane-based singer Mary-Jane Carpenter.

Day two featured a varied program, starting with the OWN Australia annual general meeting – this year passing a motion proposing a change of name to the National Older Women’s Network.

This session also acknowledged a number of dedicated and long-time members, including retiring long-term Treasurer Cate Turner, Betty Johnstone from New South Wales for 30 years’ service, Ruth Kershaw from Western Australia for 25 years’ service, past national OWN Presidents Sally Jones and Mary Novikov,  and Moira McGuiness, Julia Boles, and Barbara Silverstone for their personal contributions over the years. Tribute also was paid to Aileen Ward from WA and Win Metcalf from Qld who passed away this year. Conference delegates applauded the appointment of the new National Council: President Aloma Fennell; Secretary, Sharan Tuite; Treasurer, Larissa Bergmann and members, Sue Joslin from WA and Ruth Sargent and June Donnelly from Queensland.

Following the National AGM was a lively discussion panel chaired by Leonie Sanderson from the Ageing Revolution, with insights from Senator Claire Moore, LGBTI ageing advocate and OWNQ member Jill Bolen, OWN National Convenor Aloma Fennell and OWNQ State President June Donnelly across a range of perspectives on the conference theme as well as questions from delegates. Speakers were very well received and we were particularly delighted Senator Moore could attend to share her well-informed understanding of the issues affecting older women – as did all on the panel.

The OWN Illawarra Drummers kept energy levels high through the final afternoon, providing delegates their own chance to try the instruments as well as being treated to a performance. Thanks too to Barbara Malcolm of the Illawarra Drummers for her generous conference raffle prize donation of a beautifully handmade quilt, won by Mackay member Jenny Scott. The initiative raised $300 for donation to National OWN – welcome support given the national body receives no Federal funding.

Congratulations and a big thanks to all who put in many hours through the year to create such a memorable two days, for all who helped over the conference – and last but no means least – to all who participated. May we carry the messages and energy of “Surviving and Thriving” well into the future.